Today’s Wall Garden at Ballard Gardens is planted in front of a stone wall that dates to the early-twentieth century when L. Horatio and Anna Biglow, Elizabeth B. Ballard’s parents, built the Lord & Burnham greenhouse that is still in place today. The stone wall separated the cold frames on the west side of the wall, also still in place today, from the cutting garden beds on the east side of the wall.  The undated photographs below show delphiniums in the cutting beds in front of the wall; the photographs probably date to the late-1940’s. 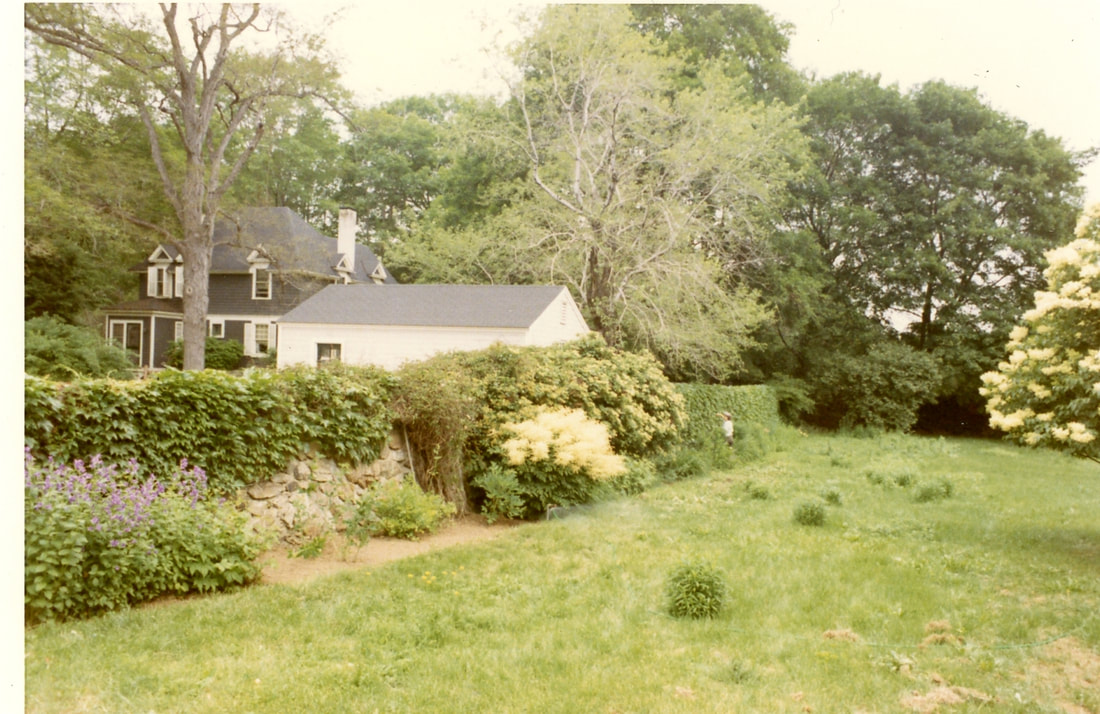 ​When Elizabeth B. Ballard died in 1964, she donated nearly five acres of her property to the Town of Ridgefield for what is now Ballard Park. The greenhouse and this stone wall were not part of that donation. Mrs. Ballard’s gardeners continued to maintain the wall garden for some time after her death as shown in this 1970 photograph.
​By 1982, Mrs. Ballard’s gardeners had retired, and Ridgefield Garden Club began formally caring for this wall garden. The club has continued to maintain the Climbing hydrangea which dates to at least Elizabeth B. Ballard’s time. Over the years, the club and has planted and maintained a variety of other perennials in this garden.
"EDITH'S GARDEN"
For decades, Edith Meffley, a longtime gardener, and member and past president of Ridgefield Garden Club took particular interest in caring for this wall garden along with her husband, C. Fred Meffley. As a result, for years, members of Ridgefield Garden Club have fondly referred to this garden as Edith’s Garden.
​Born in New York City on June 21, 1925, Edith was raised in Montclair, New Jersey, with summers spent rowing, sailing, and teaching swimming at the Jersey Shore. Her grandfather, who lived only a couple miles away from her, was an amateur horticulturalist who first introduced her to gardening. He built greenhouse upon greenhouse attached to his house and grew and bred orchids as a hobby, among many other plants. Edith would ride her bicycle to meet him at the train station or to his house to visit. When he was travelling across the country and the world for work – which was often - Edith would spend afternoons wandering around his greenhouses and gardens. ​
Edith and Fred, an Army Air Corps pilot and flight trainer in World War II, met at the University of Colorado in Boulder, returning to New Jersey to marry after their graduation in 1946. In 1955 they moved with their two children to Bethel, Connecticut, then to Ridgefield, in 1960.
​​Edith was appointed to the Ridgefield Conservation Commission in 1965 and served for 50 years, stepping down in 2005. She chaired the commission from 1967-1973.

Early on, Edith developed a clear, concise, and consistent message for protection of the environment through the conservation of open spaces, wetlands, and natural habitats.  During her time in Ridgefield, she promoted conservation not just through her work with the town conservation commission, but also through her work with the Ridgefield Garden Club, The Federated Garden Clubs of Connecticut, and The Garden Club of America, impacting and inspiring environmentally sound development, acquisition of open space, and wetlands preservation locally and state-wide. 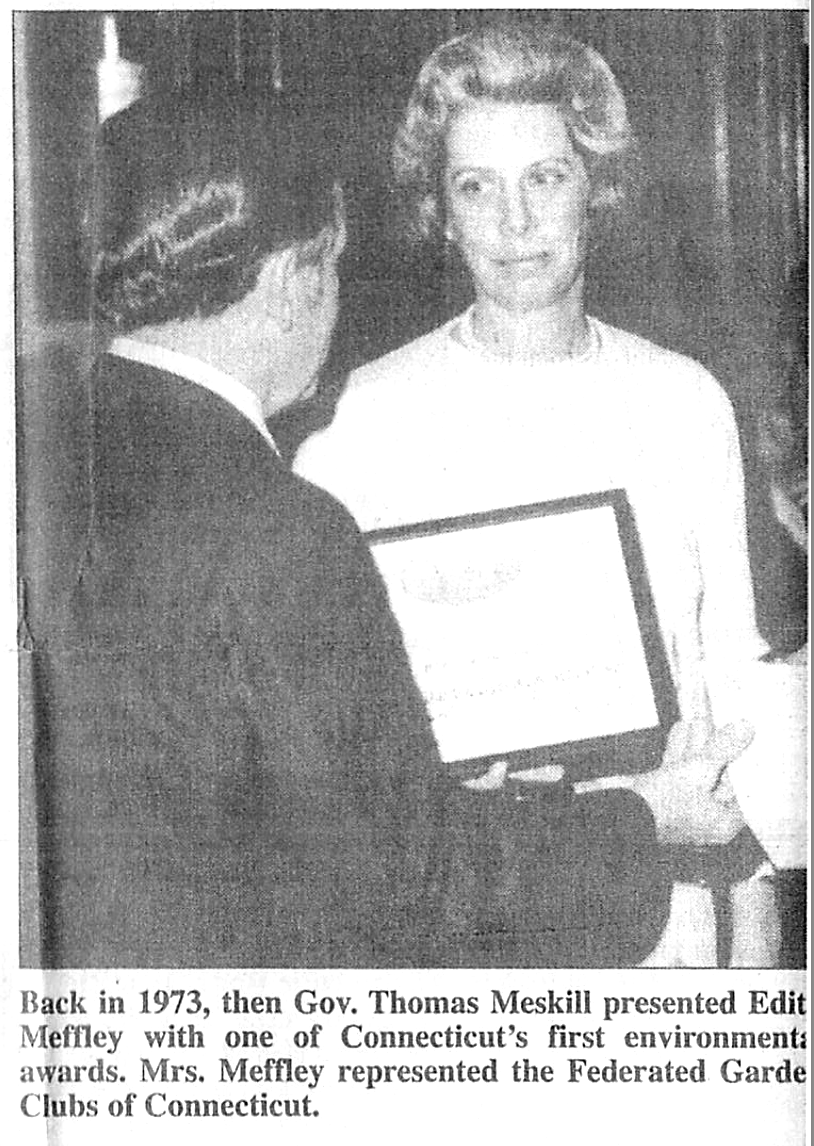 ​Edith was a founder of The Discovery Center of Ridgefield in 1985, a non-profit organization whose goals for 35 years were to foster a love of nature, an interest in science, and an appreciation of history and the cultural arts for all, particularly the young. Before ceasing operations in the late 2020, The Discovery Center of Ridgefield annually offered a diverse calendar of educational and affordable programs and events for adults, families, and children.

Edith also took an active role in many health organizations, serving on the board of the Ridgefield Visiting Nurse Association, being actively involved in Child and Family Services, and volunteering regularly with her husband at Danbury Hospital, especially on major holidays when extra help was needed most.

The earliest memories of Edith’s son, Eric Meffley and daughter Pam King are of their mother at the cemetery where her maternal grandparents were buried in Montclair, New Jersey. While Edith planted and pruned, they ran and roamed in the peace and quiet of the shaded lawns.

Edith was always at home outdoors, working in her perennial beds, walking the trails, bringing the first community gardens to Ridgefield, and spending hours working on this Wall Garden. Her children knew her as being full of life, smart, gracious, and perennially calm. A force of nature and soul whose life gives truth to Thomas Campbell's words, "To live in the hearts we leave behind is not to die." 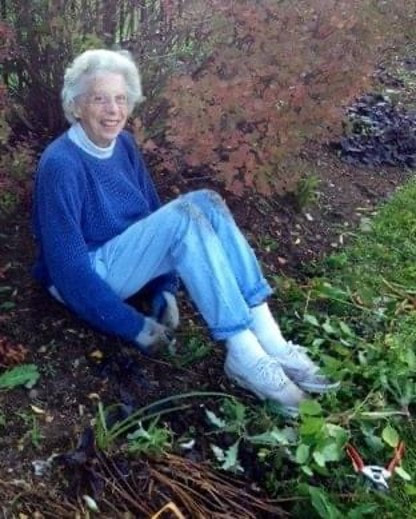 Edith died peacefully on June 8, 2021, at the age of 95 surrounded by family at the Dallas, Texas home she shared with her daughter Pam since 2015.
The Ridgefield Garden Club